Independent Tours  is offering, virtually, to  you a glimpse of the unique #Montmartre #Paris  in  #lockdown
Countdown, starting today, May 1, 2020, till the ease of #confinement on May 11, 2020 .

Come along- when ever will be possible for you- to #discover and #explore this bohemian quarter of #city of #love : Montmartre Village.

The last weekend  #lockdown  #countdown day 2 and day1 till day  #deconfinement , it has been ,for many #Parisians, full of mixed  feelings  between so- much -desired – needed – freedom of movement without ‘a honor- declaration paper’ to be presented to the  police and the fear or anxiety of the still present  #covid19 #virus- throughout #Paris area, the  #French #capital included.

Easing #lockdown  on forthcoming Monday is going to be ” After clouds, sunshine” for  some small and middle size shops, among them the most awaited #coiffeur ones. At least, the hair -do could be admired, if the color of the lipstick won’t, due to a compulsory  masks in public transport in #Paris.

This weekend, the last in the row of 6 restricted ones,  has been rather animated in the streets of #Montmartre , people doing  essential  shopping  with the vital #French baquette  to be seen in the hands of all those who are by birth of have become #Montmartrois.

Independent Tours is offering you  #Paris in #lockdown view from #SacreCoeur,  never seen before, since the existence of this most visited  uphill  spot of the #city of Paris.
For the first time, in years,  a splendid group of  coquelicot  rouge ( red poppy) that #French language is, metaphorically associated with  a coque crest- the Gallic symbol.
#Montmartre Village ‘s tiny rue Norvins, named after the Baron de Montbreton de Norvins ( 1769-1854), a historian of #Napoleon I, is the main touristic route to Place  des Artistes ( Place de Tertre). with the former rural houses used as sweet shops or small art galleries or #creperies where you can still listen to a classical piano or petits restaurants, where young #artists tried out  their talents, #painters # musicians #poets.  The charismatic #Belgian Jacques Brel used to sing in one of these places,  when he first came to #Paris, later to become a much admired #singer in #France. 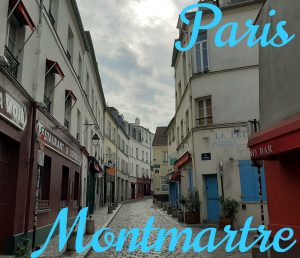 Before #lockdown, rue Norvins was populated with visitors and travelers heading to #SacreCoeur, to become an empty, quiet one during the #confinement. 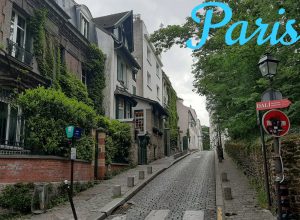 ‘La Maison Rose’ has kept his charm since its beginning , in the 18th C. Placed at the corner of two village routes, used to be visited by artists of the village who lived not far, uphill in a house, that is at the present  #Musee de #Montmartre.  The  #French painter Maurice Utrillo ( 1883-1955) an admirer of his birth village,  #Montmartre , painted ‘ La Petite Maison Rose’ ( 1900) and ‘Le Carrefour de la rue des Saules et rue Cortot a Montmartre’ (1938). 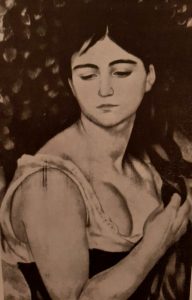 At the end of the 19thC, a countryside  19years old woman came to #Montmartre to start a new life. Her beauty , quickly was remarked by the eyes of the painters, whom they were happy to have as a model for their work.  After changing the surname  into Suzanne to  better fit  her time,  she became herself a painter, under the  precious guidance of her masters, namely Renoir et Degas. Suzanne Valadon (1865-1938) the ‘  #French -woman- painter’ in the world of art dominated by men,  lived with her natural son, Maurice Utrillo in Montmartre , rue Cortot. They both rest in peace in the cemetery, St. Vincent,  not far from ‘La Maison Rose’, in #Montmartre.
The #French #Impressionist #painter, Auguste  Renoir (1841-1919) made ‘Le Portrait de Suzanne Valadon’ ( 1886).
#Coronavirus #pandemic has hit France as well. Since March 17, 2020, the country has been in #lockdown, with rather harsh restrictions , both for the protection of the population and for helping the medical staff to deal with the pretty high number of  hospitalized people.

Not only doctors and nurses have been  front- line fighters, but all the workers, on back stage:  medical researchers & scientists, IT specialists, police force, electricians,  rubbish collectors,  boulangers,  firefighters,  military, pilots, bus drivers, post- office staff, farmers, and many more  food suppliers and transporters.

For
See more of

people, every day, at 8pm -applause, expressing gratitude,  all over the Montmartre  Village / Paris.