When shaking hands with Emmanuel Macron- next President of France?

French people enjoy celebrating   May 1st, especially when it creates a long weekend- as in 2017. Paris is visited,   much more than over the last past years, by tourists both French and from all over the world. Our little ‘village’ Montmartre, is animated by the hundreds and hundreds of visitors & travelers & tourists on Sunday , with a sky ready to make you use the umbrella.  The last Sunday of April 2017 turned to be the Montmartre Village’s event.

While heading to my Montmartre’s residence , I could feel the positive vibes of  rue des Abbesses, an ancient street of Montmartre Village- with a woman walking past with a cute dog , a  family with a stroller and a toddler pushing it, a young men on a new electric  city- scooter slowing down to give priority to an elderly couple ,with a not so fit dog, a group of noisy youngsters greedily  eating  takeaway – pancakes  and making jokes in a language I understand about the chocolate ’s  moustache  on their  faces,  a terrace  with a group of  French TV stars enjoying  oysters with a nice white wine of Sancerre,  some visitors standing in line to buy a baguette ( the best baguette of Paris 2010/2015), a 5-year girl in pink  riding a pinky bike with her blue bunny-toy in the front side basket. You feel so good about Montmartre, I promise!

I was so surprised to see a big crowd  in front of a small Cave a Vin (wine shop) that made me curious to find out what’s was going on.  To make you understand,   in  the rue des Abbesses  can happen anything, at any time,  street concerts, carnivals, football match getting together fans, passionate suicide event, vineyard feast, street dancing, just-married couple photo shooting, film shootings, flee-market, Christmas market, Street Music Feast, etc 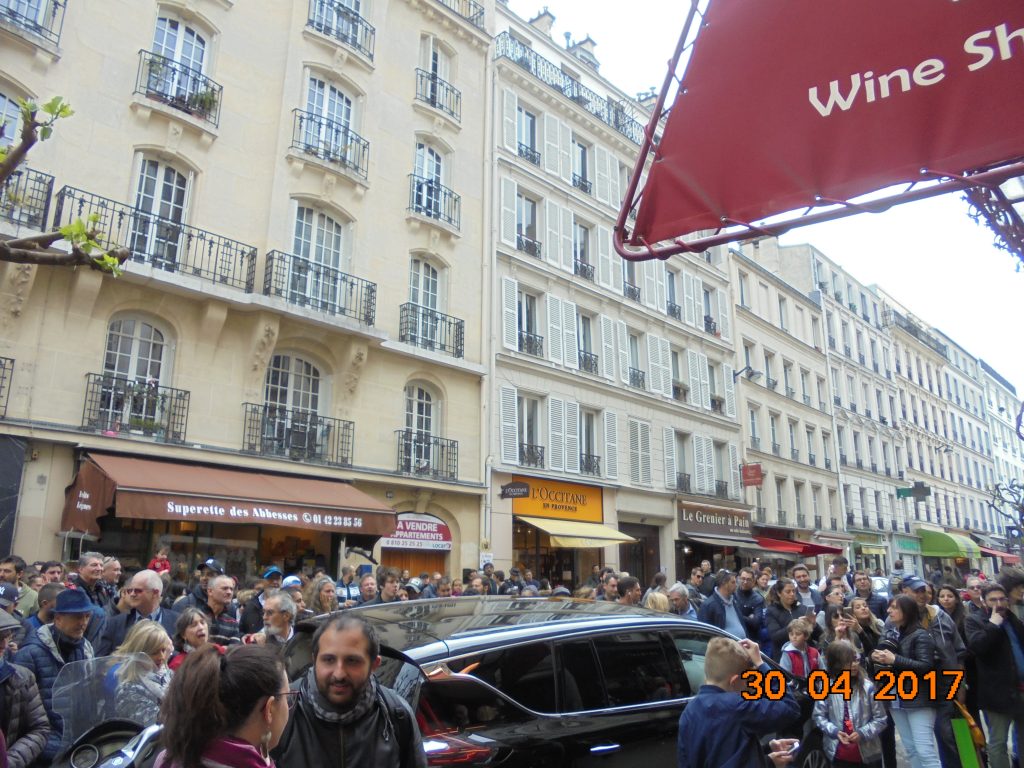 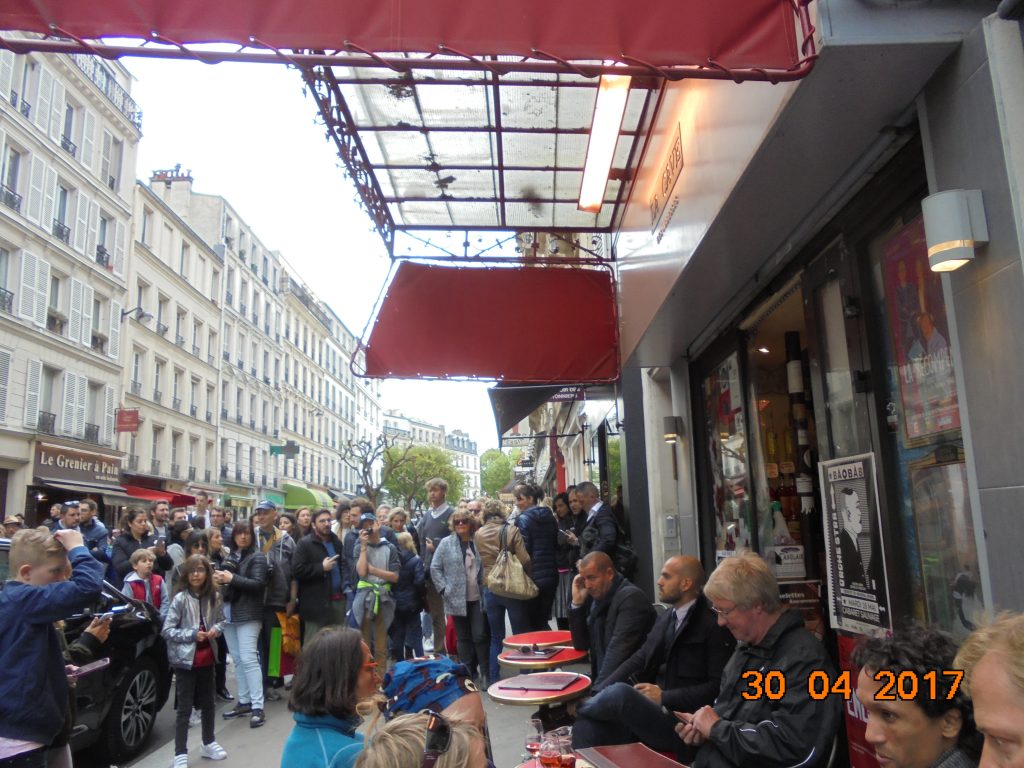 Yet,  I’ve never seen some many people in front of this little wine shop, for there is neither TV screen to attract football fans  in there,  nor a restaurant. It’s just a 4- small -round -table spot  in front of the entrance and a space at the back of the shop , where you can have a bite to  go with your glass of wine. Curious indeed I was!

When inquiring some people about what was happening , the first intelligible answer caming from a French man was a typical one: ‘Apparemment ,  c’est Emanuel Macron  en train de dejeuner ici’  (‘It seems to be Emmanuel Macron in there, having lunch’)

‘Emmanuel Macron?’ Another voice, as surprised as myself, was heard over from a French woman, ‘Ici, a Montmartre, pour  dejeuner?( ‘Here in Montmartre, for lunch?)

I arrived- not with some difficulty, at the left side of the wine shop entrance, prepared to see – perhaps- the next president of France.

Luckily, there was nobody in front of me to ‘ block’ my sight, except one table with a blond- hair- blue eyes –speaking- German couple ,  enjoying indeed all the photo cameras and mobile phones flashes directed towards them.  The German couple was acting as being the tourist stars of the day.

Behind me, a young   Asian couple was trying to find out what was going on.  I turned my head to see that the young man, in a grey suit and white shirt, more a business attire rather than a tourist like one, seemed quite excited at the idea to eyewitness the presence of the ‘next President of France’.  His girlfriend, a beautiful young woman from Beijing,  keeping closely to his body, was  even more excited about the- much- awaited  event in this very touristic corner of  Montmartre.  After having impressed  the young man –Steve- with my guess of his where about ( Hong Kong) and the girl- Helen-with my guess of her studying Management in London, I was, on my turn, totally astonished  to see on their  mobile search machine that the Asian polls were indicating a majority of votes for the so called’ Justin Bieber of the media’-  E. Macron!

The rain started to act as an extra on a movie setting, as my temporary Asian neighbors  had no umbrella of something similar, I offered mine, blocking the view of another tourist, with a heavy   Russian -English accent- who was claiming her right to get a glimpse of the star of the moment.

A short French lady next to me, as curious as the rest of the others, visibly irritated, was reproaching a man, not taller than she, of blocking her sight.  She demanded the man to move off of the spot. The middle –aged man, in blue- jeans, clearly amused by the French lady’s angriness, calmly introduced his right hand in the pocket of his trousers and showed her a police officer’s badge-to  the general amusement  of everyone in their vicinity.  Discreetly, more under-cover policemen encircled  the entrance door of the wine shop and the black car with dark windows, a sign that the “H’ moment was approaching.

The German couple having some Camembert cheese and a glass of wine, at a table in front of the wine shop, whom I had a sec chat with,  was so happy to be in such an unusual event in their life, confessing in German to me that it’s  would  be, by far, the biggest present surprise for their marriage anniversary they were celebrating in Montmartre/ Paris that  day.

Two minutes later, Emmanuel Macron’s smiling face showed up in the frame of the door of the wine shop. He seemed to be contended by the huge crowd of people standing in front of the shop, just for him. His blue eyes were scanning the people around.  He was wearing  a short dark – blue jacket and a  red-white- blue scarf -the French national colors- around his shoulders , as casual as someone can be in Montmartre, this young presidential candidate, was enjoying  the  cheering up crowd. He turned to the left, after shaking hands with the German couple sitting at the table, came towards my position and shook hands with me.  WOW! Quite a special moment, I may say, taking into account that he can be the next President of France, in a week time, after the second tour, on May 7!

‘Bravo, Bravo, Bravo! ’- voices  behind and in front of me could be heard, while Emmanuel Macron was carrying on with  his brief , but intensive shaking hand  tour- with people lucky enough to be able to get through the barrier of body guards & police officers.

Hundreds of flashes and voices were praising Emmanuel Macron’s presence in the main street of Montmartre Village- Paris ,on a cloudy Sunday, projecting a bright future of France. 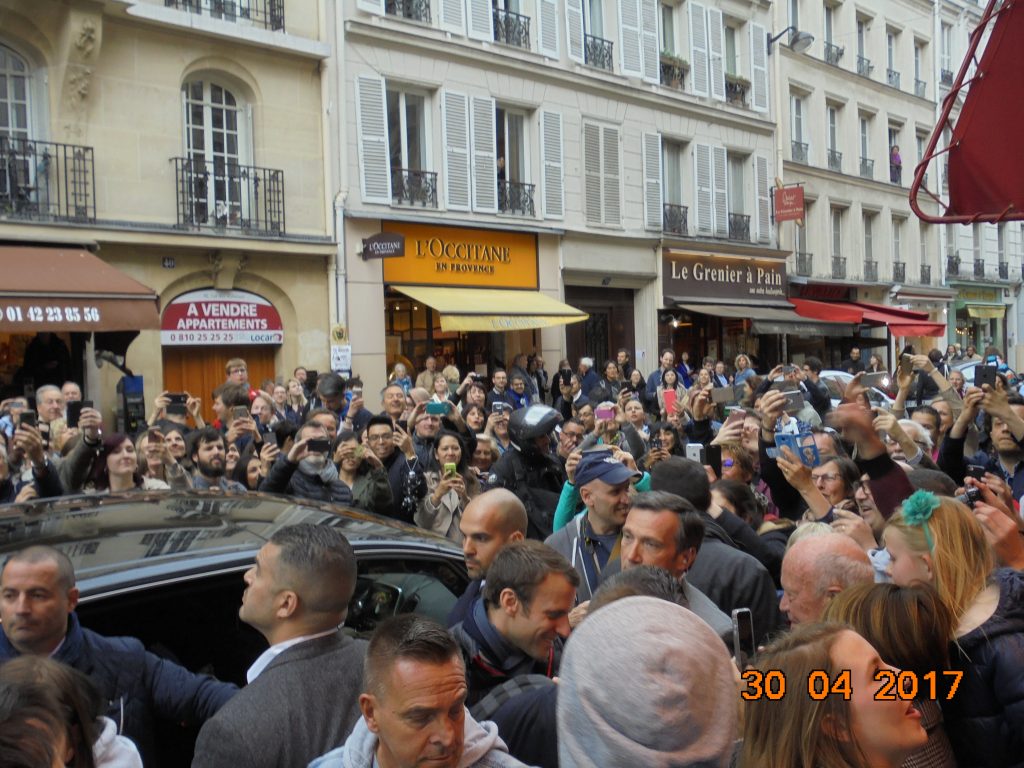 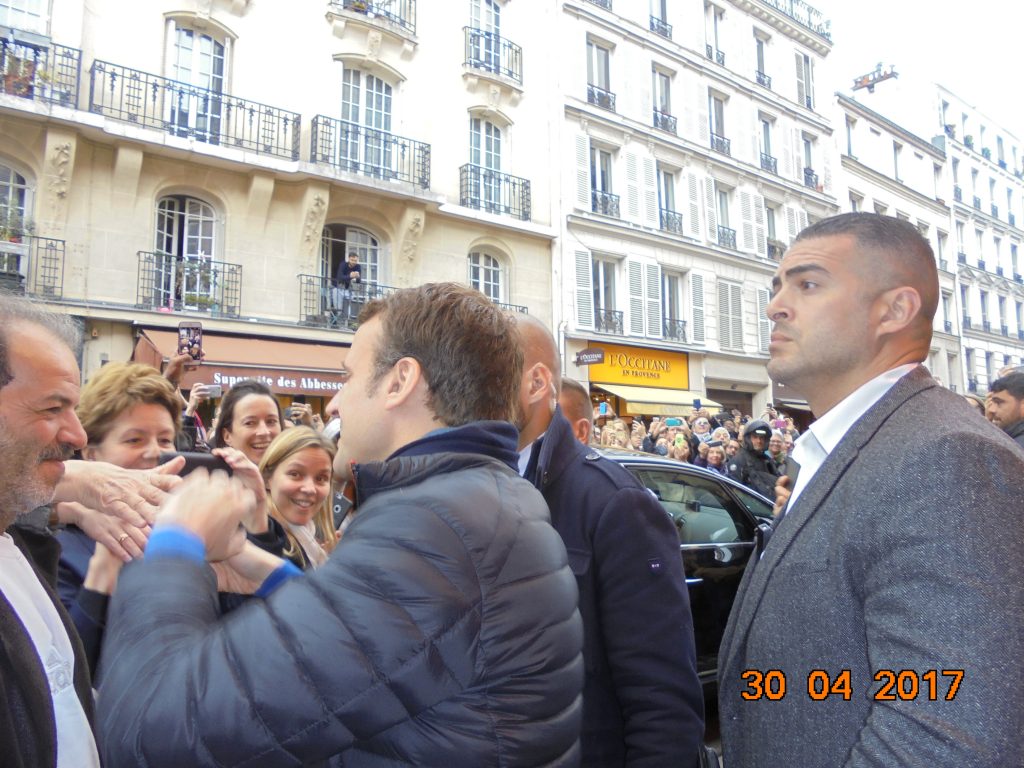 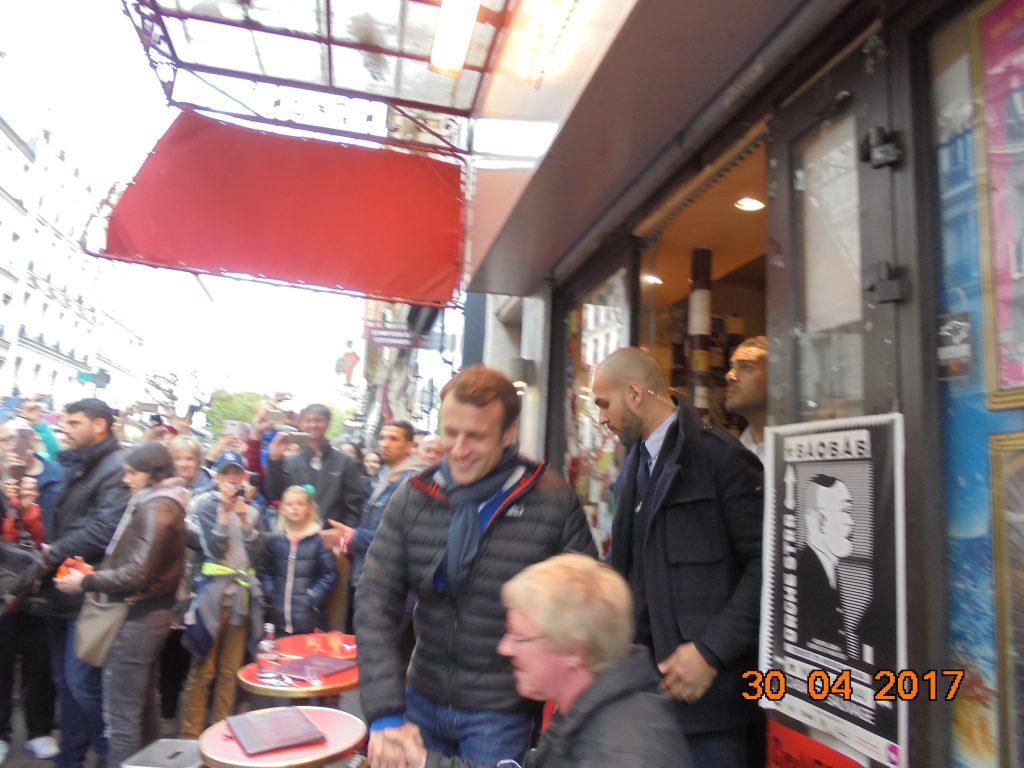