Let’s start walking together again on this blog, for in Paris is plenty to be seen. It’s a delight to have a stroll in the streets of Paris, without or with a purpose. While I’m walking in the streets of Paris (I’ve been doing this for 15 year residency in this city), I’m looking to the right and to the left and , even in the same street, I discover something ‘ new’ for me. It’s amazing, isn’t it? I’m determined to demonstrate it to you, my friends. Each time I have a stroll in Paris, I’ll send you some pics and some of my thoughts and information on this blog. I promise!

President Wilson Ave, (Th. W. Wilson President of the USA 1913-1921) is to be walked through .. in 20 minutes( my pace), starting in Place d’Alma and finishing up hill at Place de Trocadero.

You’ll get ,most of the time, a glimpse of the Eiffel Tour on your left side, a reward well deserved for your walking adventure, in an area, considered ‘ touristic,’ though. Yet, there are plenty of quiet spots, where you can be in complicity with the art, nature and splendid buildings (most of them – Haussmann Style), built at the end of the 19th century, the beginning of the 20th.

In this avenue there are no shops or hotels, or even not a café or restaurant believe it or not! You full up your batteries having a coffee at either at Place d’Alma or at Trocadero. However,

there is an attractive café terrace, rather hidden. Walk with me and discover it, after a 10- minute stroll. 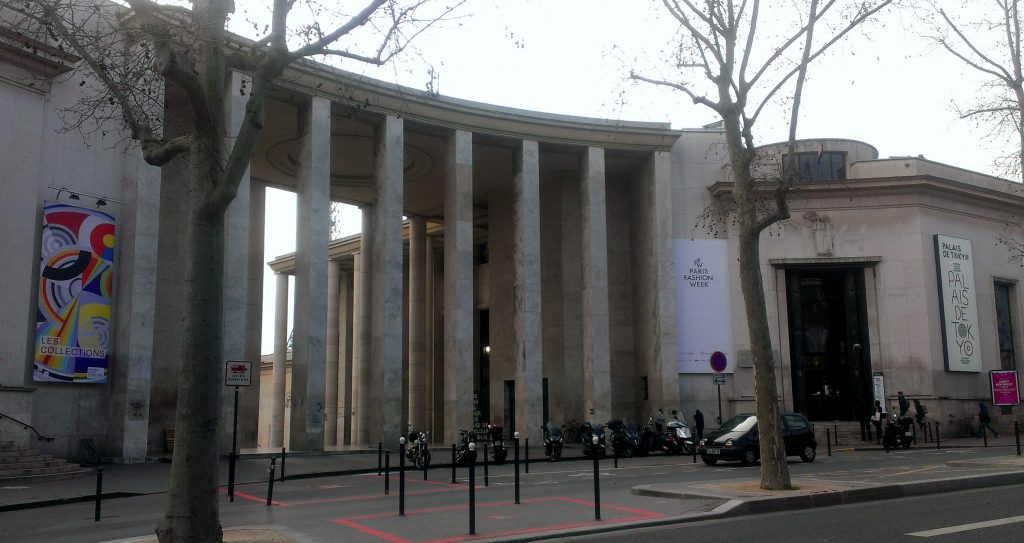 The first impressive building (1937), is a large one hosting two museum/ exhibition spaces: the east side of the building , a state owed one, is the ‘ Musee d’ Art Moderne’ presenting Fauvism till

nowadays artists. Ongoing exhibitions: 1. P. Modersohn- Becker’ Intensity of a Glance’ – A. Marquet ‘Painter of Suspended Time’- S. Evans’ and Jan Dibbets ‘ Photography. The West side of the same building is the ‘ Palais de Tokyo” offering you a large variety of exhibitions, dance, music, etc events and ateliers. The ongoing are: J-M Alberola ’Detail Adventure’- F &amp; M Quistrebert ‘ The Light of the Light’- L. Beltrame ‘ El Brujo’- S. Evans’ Not Not Knocking on Heaven’s Door’- S. Fariau ‘Repetition of a Repetition Doesn’t Amuse Itself by Repeating Itself’ Here we are, your discover that getting a moment of relaxation for your eyes and feet could be beneficial while having a coffee/team break on its café/ terrace ( the only one in your stroll!!) of admiring the river Seine and Eiffel Tower in its full splendor. 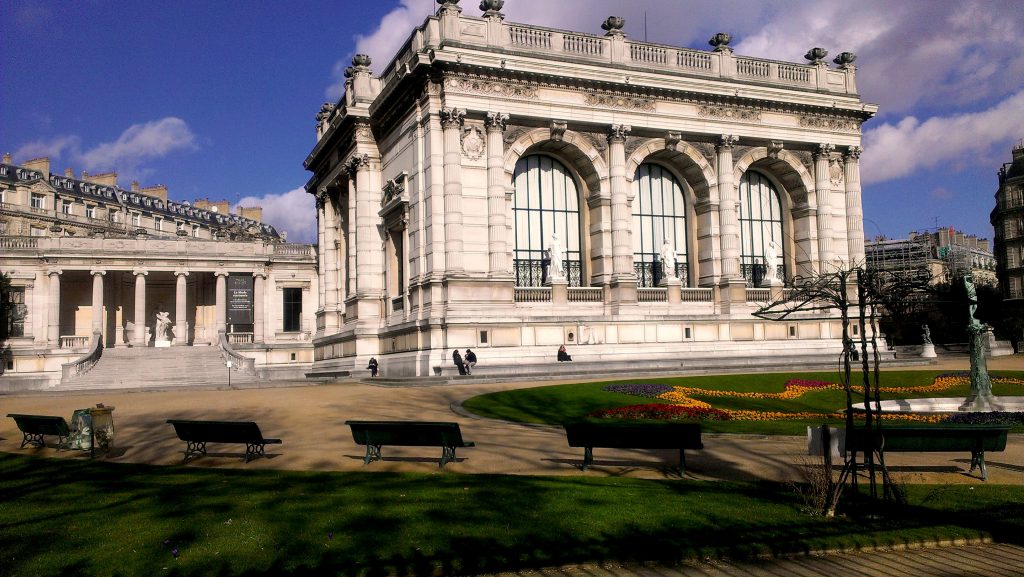 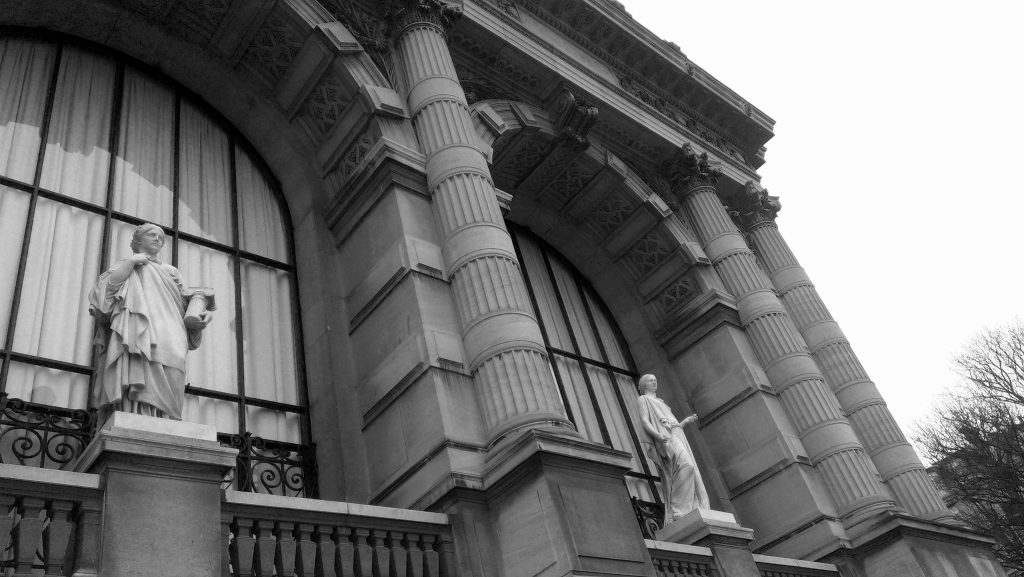 Turn your look to your right and there it is: the magnificent building of the ‘ Palais Galliera/ ‘Musee de la Mode’ ( 1894) and Galliera – Brignole Square, where you can find peace &amp; quiet. Palais Galliera , in Italian Renaissance style, – architect Ginain- is Duchess Galiiera ‘s donation, a woman whom I admire a lot. 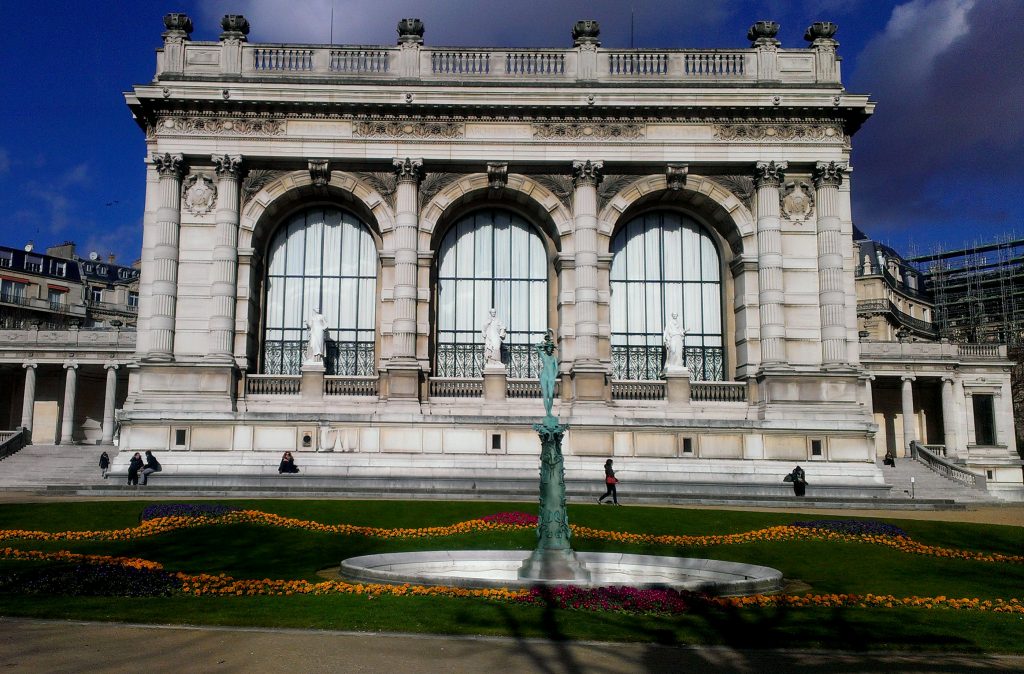 aristocrat, Duke Galliera, who made a fortune in the construction of European &amp; South American railway infrastructure, banking and assurance company, also financing the Suez

Channel construction, was considered the richest in France. The couple had three children. The first two born daughters died at a young age. Their son was an excentric and, somehow, had a

weird attitude at his father’s death, declining the title of nobility and part of the immense family wealth, after he had been adopted by an Austrian aristocrat. Duchess Galliera lived for many

years in the family’s property – L’Hotel de Matignon – Paris (1724), where she had a valuable art collection. She left Hotel Matignon in 1886, after the Law of Exile had been voted by the French

government, forcing D’Orleans family, her included, to leave France. (L’Hotel Matignon has been the Prime Minister’s Residence since 1958). The foundations/donations Duchess Galliera

made both in Genoa (hospital) and France are impressive, such as: ‘Home for Orphans &amp; Elderly People in Meudon, Hospice Ferrari – in Clamart, School of Political Science in Paris, School of Civil Engineering in Paris. Unfortunately, she had died (1888) before Palais Galliera was finished.

Her art collection can be seen at Palazzo Rosso and Palazzo Blanco- in Genoa/ Italy. 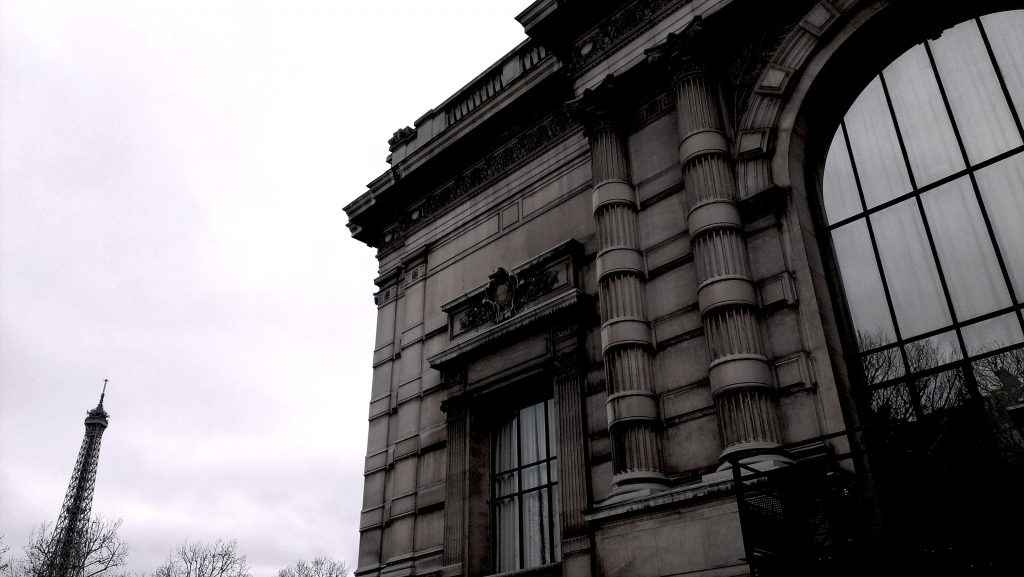 Palais Galliera has been a museum for temporary fashion exhibitions, since 1977. The next one opens in May 2016: ‘The Anatomy of a Collection’. 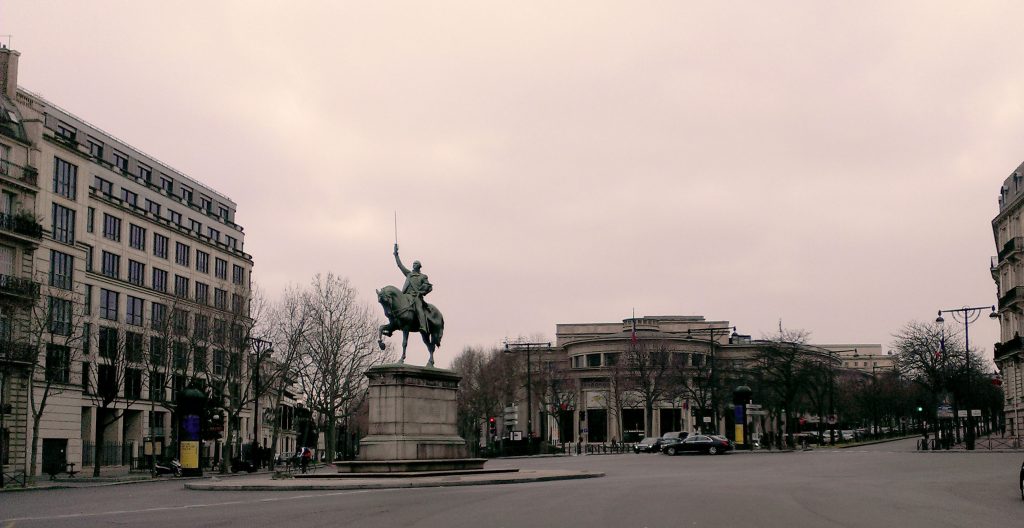 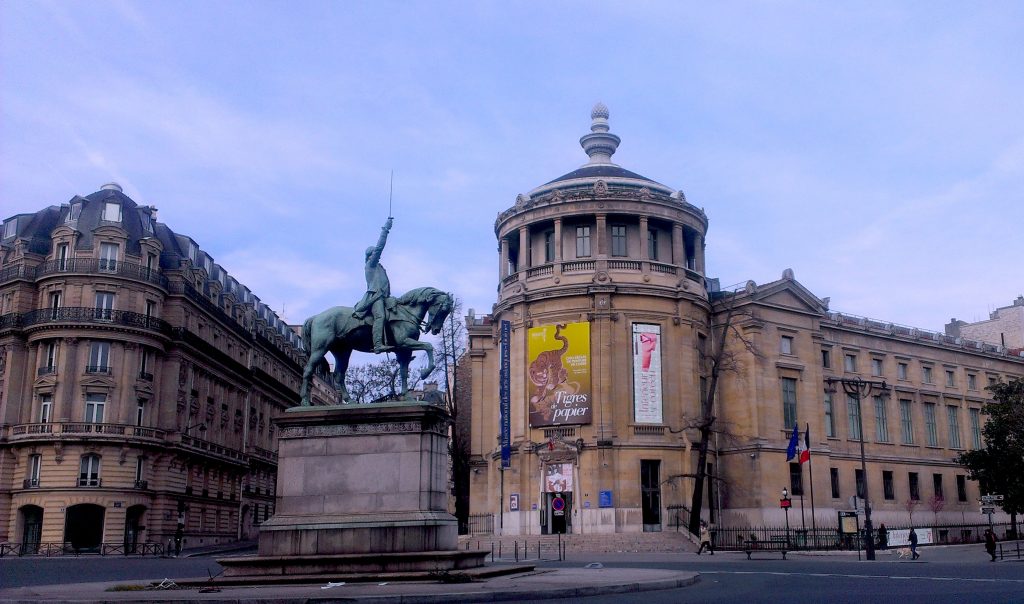 Place d’Iena, with the equestrian statue of President Washington ( 1900) is dominating the area including Palais Guimet -Asian Art Museum ( 1889). 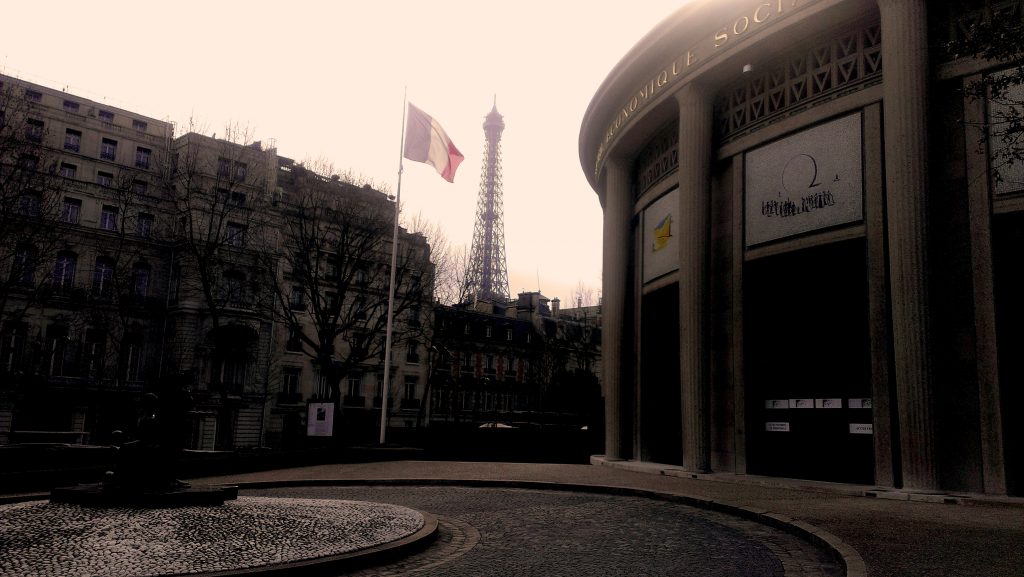 Just in front of you, there is Palais D’Iena – Art Deco style (1937)- the HQ of the ‘ Economy & Social  Environment Board’ and the “ International Chamber of Commerce’ -with a glimpse upon Eiffel Tower, of course. 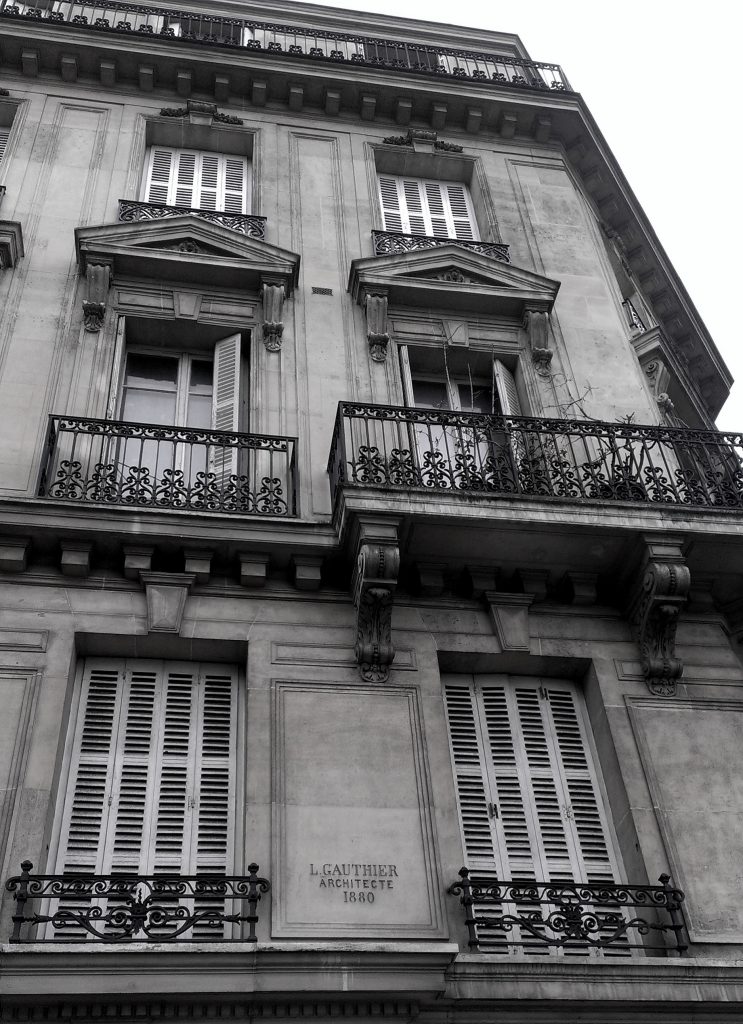 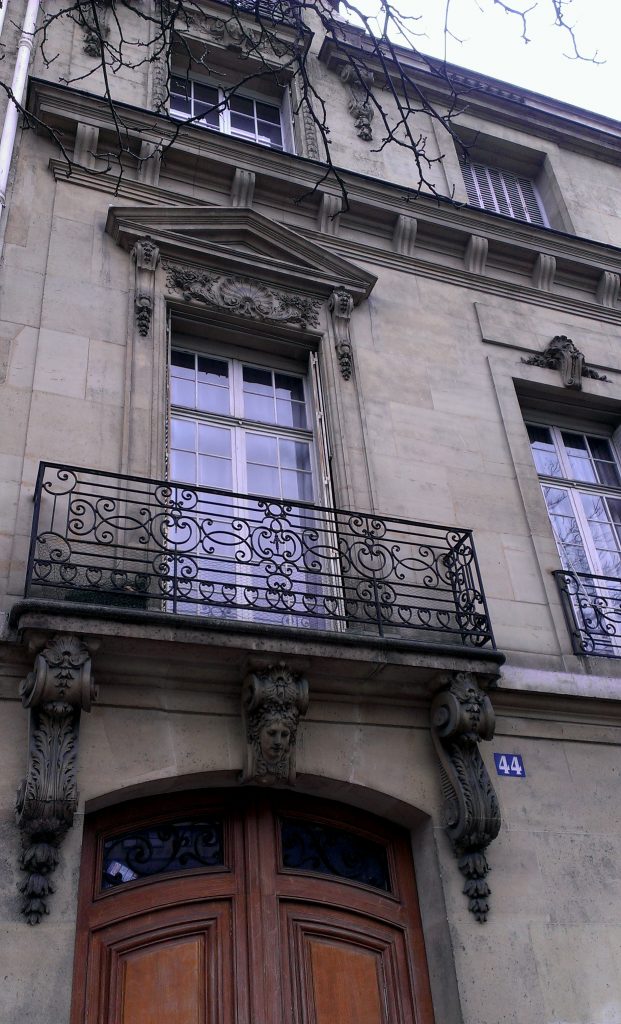 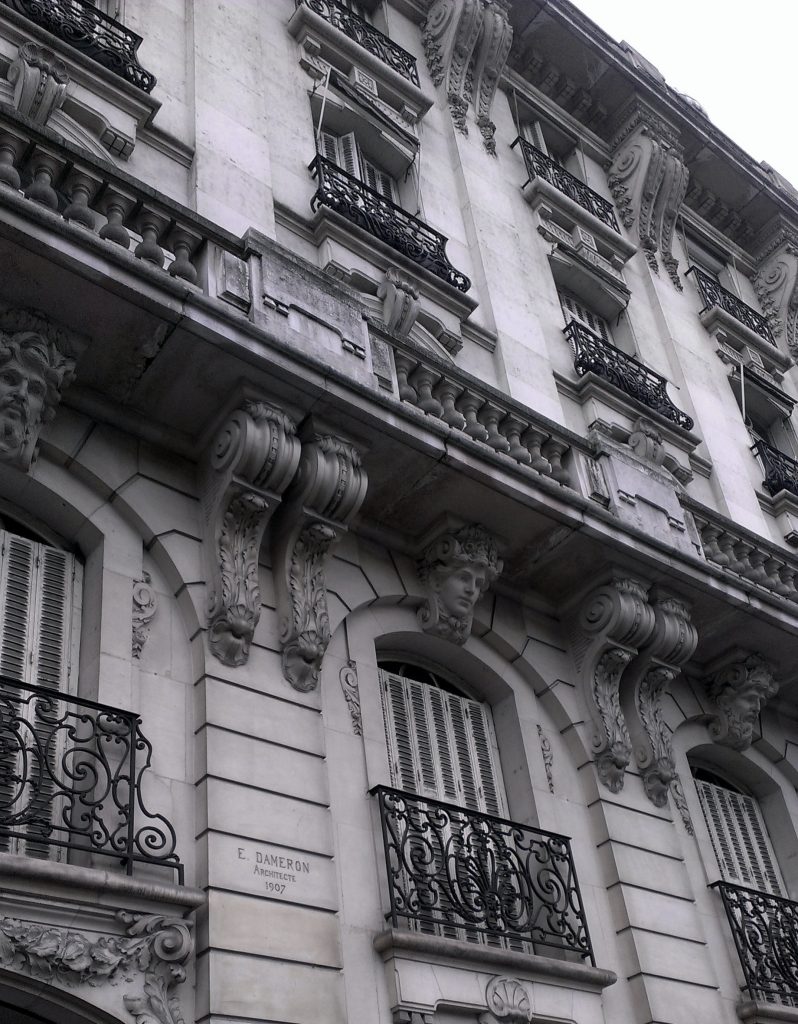 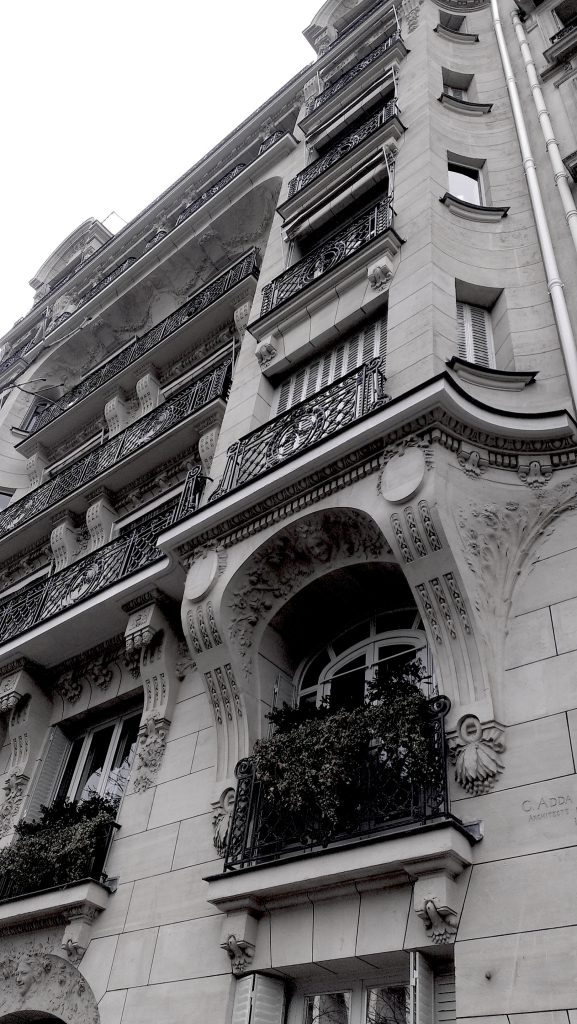 Between Place d’Iena and Place de Trocadero , the Mexican flag is marking the presence of its Embassy in Paris, in a Haussmann Style building – as most of them along the right sidewalk.

There is a brief stop at the traffic lights -where you can have a nice view upon the south side of Paris with its the ugly Montparnasse Tower ( 1970) on the ‘ mountain’ with the same name ( left bank of river Seine) and famous Eiffel Tower ( 1889) on the left bank too. 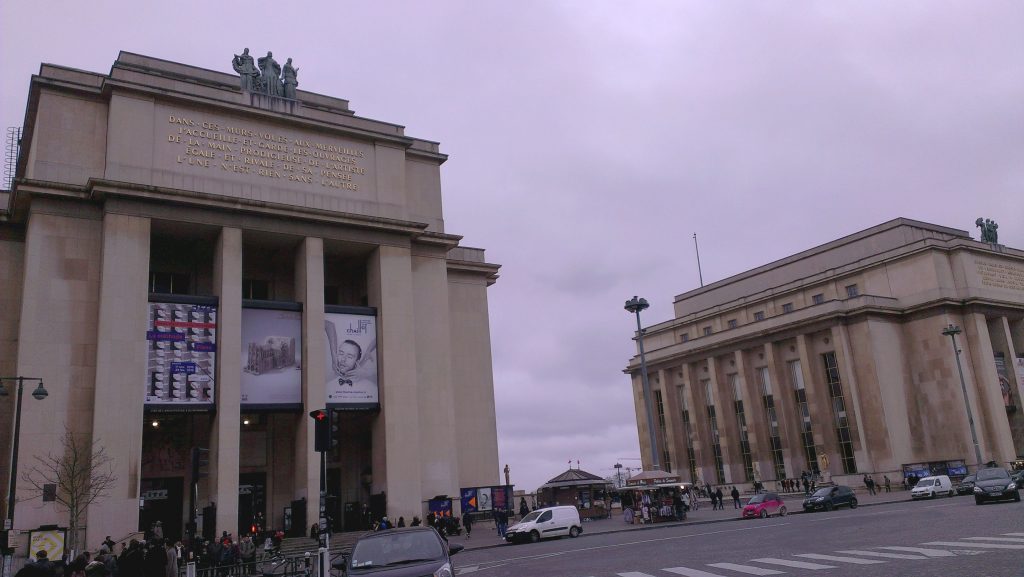 After a 20 minute walk, Place de Trocadero (1869)- flanked by Palais de Chaillot ( 1937,neo- classical style) and Marshal Foch on his horse(1951) looking at the Eiffel Tower, brings you into the

tumult of a hectic traffic, café’s / restaurants/ brasseries and thousands of tourists pouring towards the “Esplanade of the Human Rights” (1930/1985) of the Palais de Chaillot, with a 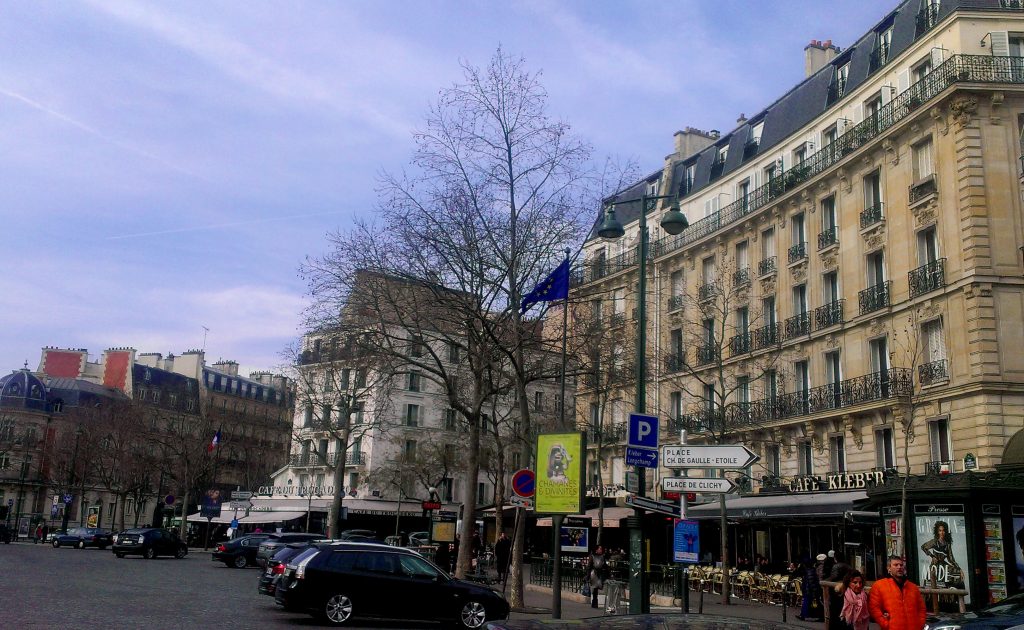 I adore Paris in sprig! You too?